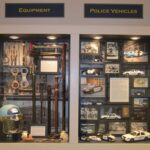 In 2011, officers and staff of the Sioux City Police Department formed a committee to coordinate the construction of a museum on the 2nd floor of police headquarters. The goal of the museum was to preserve the over 150 years of Sioux City Police History. The “Hall of History” would slowly evolve as a resting place for various artifacts from all eras of the Sioux City Police Department, allowing visitors to understand the considerable changes to policing over the years.
SiouxCityPolice@sioux-city.org
712-279-6411
http://www.siouxcitypolice.com/sioux-city-police-museum
601 Douglas Street, Sioux City, IA, USA
244 Views
0 Rating
0 Favorite
0 Share
Arts & Entertainment
Explore

Is this your business?

Claim listing is the best way to manage and protect your business.

Whistle Stop Antiques provides customers with nothing short of a unique & fabulous shopping experience. We are set up like an antique mall with a wide
506 Nebraska Street, Sioux City, IA 51101, USA
404 Views